“Amber asks Tim about the key challenges he sees for CEOs now and into the future, and for the single best piece of advice he gives to his clients…. To which Tim replies, “Can I give two..?”

Transcription
Amber Sherlock: So what are some of the challenges you see for CEOs, either now or into the future?

Tim Ferris: One of the biggest ones right now is that we have a trust crisis in this country. Swinburne University, did a study in 2015 called “Leadership For The Greater Good”. One of the questions in that study was, “Do you believe there’s a leadership crisis in this country?” 58.3% of people said, “Yes”. It asked about how trusted leaders were. And I’ll distill the figures into the pragmatic outcome here… when a leader speaks, about 40% of the people that they’re speaking to flat out don’t believe them – just flat out don’t believe what they’re saying. A further, 50% are sceptical at best. Only 10% actually take that leader on face value and believe them – because they actually trust them. Now, if you think about the amount of effort that is wasted trying to convince people, because they just don’t believe you… And the biggest problem is one of trust. And I say in my book right up front, the biggest question that, as a leader, you need to answer is, “Am I trying to gain control of my organisation? Or am I trying to gain the trust of my organisation?” If you’re trying to gain control, we’re either going to have a whole lot of conversations to resolve that, or we’re probably not going to have a lot of fun working together. Because, if you can gain the trust of your organisation, you’re going to be deeply influential, even when you’re not in the room.

Amber Sherlock: What is the single best piece of advice you give to your clients?

Tim Ferris: So, one is, “the view from the top of the food chain is very different to the view anywhere else in the organisation”. Often CEOs fall for, “this is the way I see it, and this is the way everyone else sees it…” But when you’re at the top, controlling the resources, it’s a very different view and a very different experience to when you’re further down, and you can’t just go, “I don’t like this, I’m going to change it”. So, as a result, CEOs are often unaware of their impact. And the other message would be “as a CEO, you are the chief emotion creator in your organisation, and the way people feel working for you, matters”. It directly impacts their productivity. It directly impacts whether they use their energy to cover their backsides or the finger point and blame, or they use their energy to actually get results for the organisation.

Amber Sherlock: Your book is, “CEO Strategy – Getting It Right The First Time”. Tim Ferris, thank you so much for your time. 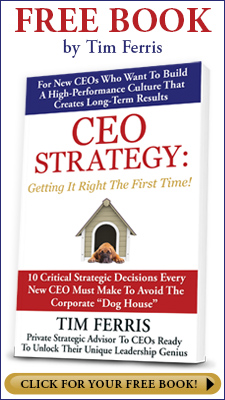